“Tall, trim and handsome, with a Hollywood smile, he also emits some of the most beautiful sounds to be heard on the current opera stage.”

Piotr Beczala returns! Last seen at SDO for A Masked Ball and the Verdi Requiem, this charming and handsome Polish tenor is taking the world by storm. A recipient of Opera News Award for Distinguished Achievement, Beczala’s “glorious voice” has graced the stages in Munich, Dresden, Vienna, San Francisco, Chicago, the Met and many more. Don’t miss an evening with this “thrilling Polish tenor, who has the kind of voice you want to hang medals on.”

“Beczala was in glorious voice from the moment he took the stage…Blessed with surpassing vocal beauty, ease of delivery and a fine, ardent physicality, the tenor visibly loves to sing…” 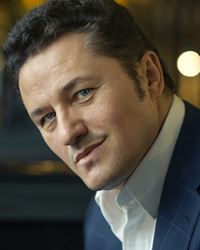 Polish tenor Piotr Beczala made his Company debut as Rodolfo in 2010’s La bohème and was seen in 2014 Gustav III in A Masked Ball and appeared as a soloist that same season in the Verdi Requiem. Recent engagements include Edgardo inLucia di Lammermoor at the San Francisco Opera, the Duke of Mantua in Rigoletto for the Metropolitan Opera, the title role of Werther at Opéra National de Paris, performances of A Masked Ball at both the Bavarian State Opera and Vienna Staatsoper, the title role of Lohengrin at Semperoper Dresden. Other notable engagements include the title role of Faust, Les Chevalier des Grieux in Manon and Rodolfo with the Metropolitan Opera, Rodolfo with Vienna Staatsoper,  La Scala and the Salzburg Festival, The Prince in Rusalka with Bayerische Staatsoper, Edgardo at Vienna Staatsoper, Hamburgische Staatsoper and in Tokyo, Riccardo/Gustavo, the Duke of Mantua, and Alfredo Germont in La traviata at Opernhaus Zurich, the Duke of Mantua at Paris Opera, Faust at Gran Teatre del Liceu in Barcelona, Alfredo Germont at the Royal Opera House, Covent Garden, Count Vaudémony in Iolanta with the Salzburg Fesitval, Romeo in Romeo and Juliet at the Metropolitan Opera, the Salzburg Festival and Royal Opera House, Covent Garden, Lensky in Eugene Onegin with the Metropolitan Opera and San Francisco Opera, and Tamino in The Magic Flute and Rodolfo with San Francisco Opera. His first engagement was at the Landestheater Linz and in 1997 he became a company member of the Zürich Opera, a distinction he still enjoys. His repertoire also includes the title role in Werther and The Tales of Hoffmann, Don Ottavio in Don Giovanni, the Italian Singer in Der Rosenkavalier, Camille de Rosillon in The Merry Widow, Jeník in The Bartered Bride, the Shepherd in Król Roger, Synodal in The Demon and Orombello in Beatrice di Tenda. He is very busy as a concert soloist joining frequently the leading orchestras of the world.  He has released two solo aria CDs; Salut, featuring French and Italian arias and Slavic Opera Arias. His DVD releases include a series of performances from the Zurich Opera including: Rigoletto, La traviata, Die lustige Witwe, Die Entführung aus dem Serail, The Magic Flute, Simplicius as well as Don Giovanni, among others.

Saturday, September 17 at 9:00pm
Westin San Diego Gaslamp Quarter
Join us immediately following Mr. Beczala's recital at the Westin San Diego Gaslamp Quarter where, under the stars of the fourth floor Garden Terrace, we’ll get a chance to meet Piotr Beczala, mix and mingle and enjoy a wine and champagne reception with light hors d’oeuvres and desserts.Tickets are $50 per person. ADD TO YOUR TICKET ORDER TODAY!

If you have already purchased your recital tickets and would like to attend the post-recital reception with Mr. Beczala, you may purchase the reception here.

We are happy you may be joining us during our 2021-2022 Season. We are committed to the health and safety of all our audience members.

Before beginning your order please read and acknowledge the Safety Protocols below. Thank you.

In compliance with current safety requirements of the State of California and the venues where we perform, San Diego Opera requires proof of full COVID-19 vaccination or proof of a negative COVID-19 test (48 hours before an event for a PCR test, 24 hours before an event for a rapid antigen test). Additionally, masks will be required for all audience members while inside all of our venues.

California residents may request a digital vaccination record at MyVaccineRecord.cdph.ca.gov.

Your health and well-being is important to us. We will continue to post regular updates on our website, social media channels, and to communicate via email. If you have questions of your own, our main office can be reached at (619) 232-7636 or bye email to info@sdopera.org

I acknowledge that I have read and agree to following the safety protocols when attending San Diego Opera performances.